The award for the most innovative, knowledge based idea of Amsterdam

Evolutionary biologist Toby Kiers is named to the 2022 TIME100 Next List. TIME100 Next highlights 100 emerging leaders who are shaping the future of business, entertainment, sports, politics, health, science and activism, and more. “While biologists have been studying the crucial role of fungi in global ecosystems for decades, this work has gone largely unnoticed in policy development. It is exciting to see that the public is now recognizing the need to map and protect the biodiversity of underground ecosystems,” says professor Kiers. 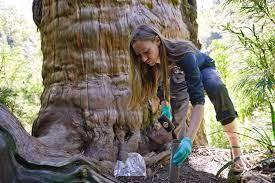 Toby Kiers has been a Professor of Evolution at Vrije Universiteit Amsterdam since 2014. Kiers is most well known for her pioneering research on the flows and architecture of plant-fungal networks, especially her use of economic theory to understand fungal trade strategies. In 2021, she co-founded the Society for the Protection of Underground Networks – an initiative to map the Earth’s mycorrhizal fungal communities and advocate for their protection. Kiers says this information is crucial in tackling climate change. “Currently, the protection of soil biodiversity – and its unrivalled power at sequestering carbon – has been overlooked in climate and conservation agendas. Every acre lost to pavement, erosion, pollution, and agricultural expansion, is a dent in our climate-regulating toolbox.” SPUN’s work was recently featured on the cover of the New York Times.

Kiers recently returned from expeditions in Patagonia, Chile, and the Apennine Mountains in Italy, where she worked with local collaborators to collect samples of mycorrhizal fungal communities across unique soil habitats. In November, she leaves for the South Pacific to characterize the fungal communities associated with nutrient-poor island atolls owned by the Nature Conservancy.

TIME100 Next List is an expansion of the TIME100 list of the most influential people in the world. The full list and related tributes appear in the Oct. 10 / Oct. 17 issue of TIME, available on newsstands on Friday, Sept. 30, and now at time.com/next.

Prof. Sander Woutersen of the Van ‘t Hoff Institute for Molecular Sciences (UvA) has been awarded a Demonstrator Grant of 160,000 euros by the Dutch Research Council NWO (Domain Applied and Engineering Sciences). Together with his colleague and Veni-fellow Dr Giulia Giubertoni he will be developing a structure- and size-sensitive chemical probe. In their project […]